Let me start with saying that despite the fact this was my first mobile app, I developed it almost two years ago. Well, technically this wasn’t even my first mobile app. At the University we had a course where we already had to develope an Android app, but this post is about my first own mobile app, which I uploaded to the Google Playstore.

First things first: What was the idea. Actually it wasn’t my idea, it was the idea of a former teacher of mine. One day he complained about all these work-hour tracking apps, which are available in the PlayStore. As a teacher and father of two (back then) he has always just a short amount of time for different work between other fixed tasks like teaching, break-supervising and private tasks. He wants to set an timer to a specific time (e.g. 30 minutes) after which he is alerted and can choose between the options to stop, pause or continue to work. If he chooses to coninue the alarm will be set again to the same time. The benefit is, that if he is suddenly interrupted with another task and forget to stop the timer, he always knows at least the rough worked time (maximum the set time – e.g. 30 min).

Let me try to give an actual example: He has to prepare for a lesson, which he plans to do for 1.5 hours. In the app he sets the timer to 30 minutes and starts working. After 30 Minutes the alarm goes off and he decides to take a break an presses pause. After the break he unpause the timer and works for another half houre before the alarm goes off again, this time he just continues and the timer is reseted to 30 minutes. 20 minutes later another teacher comes to discuess how to handle a bad student, so he stop working on the current task but forget to stop the timer. To discuss about the bad student, they go to another room. After 25 minutes he comes back and sees that the alarm went off. Now there are again three ways he can go:

Either way the time is not correct but only by 10 minutes, because the time went off 10 minutes after he got distracted. If he choosed a shorter alarm-interval, the accuracy would be even better.

Here is an overview of the current app-version. Feel free to test it out by yourself. You can find it here. 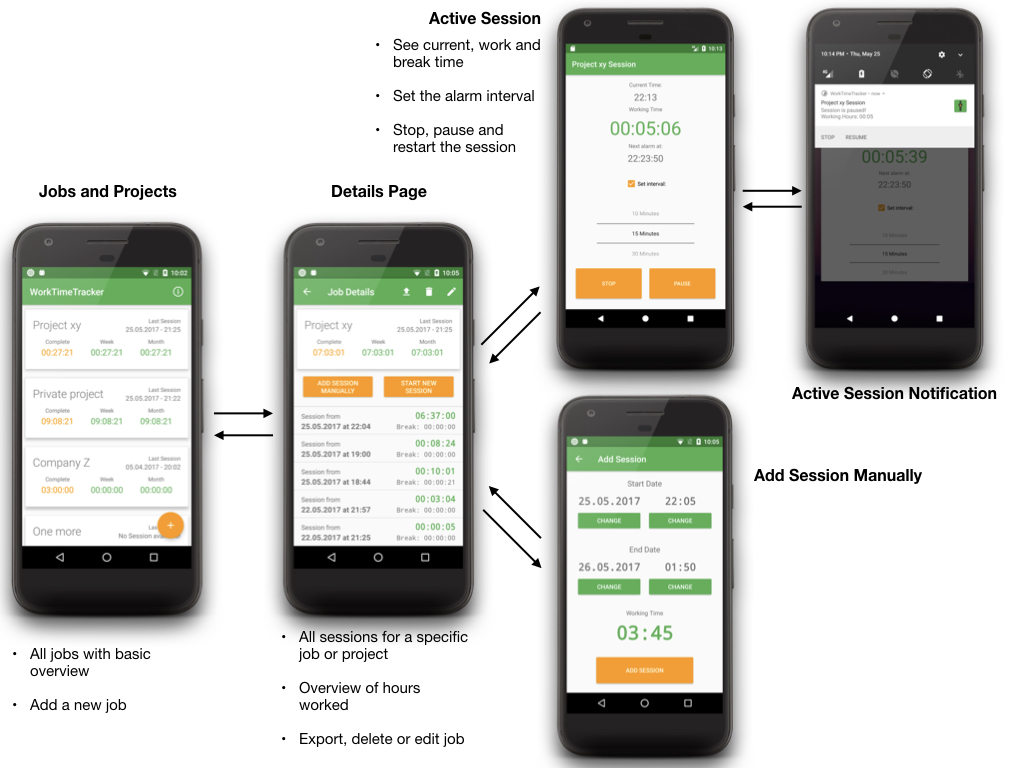