After 12 hours of sleep last night I recovered fully from the Stuttgart Hackathon this weekend. For me, it was the second hackathon. Last year our team accepted the Car2Go Sponsor Challange to build something with these driving robots on a huge map of New York and failed because of the capability of the robots, but still won the Car2Go sponsor prize. It was a great weekend but not really satisfying regarding the result.

This year the goal for me was to focus more on the idea and the skillset I have, not so much about the sponsors and what they provide.

Since my good friend Luca is at his semester abroad, I planned to team up with Freddy and Nick. Two days before the event I talked to Freddy about the hackathon and with who we team up. He had already an idea too: An app which calculates the right duration for your power nap. 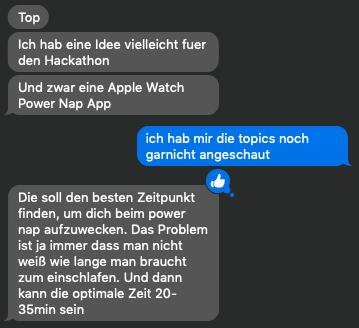 On Friday I was 15 minutes late, but the check-in was super easy and they had not started the event yet. In the beginning, there was a short welcome and the presentation of the different sponsors about what they provide. Some of them seemed not really prepared for that, which made it a little boring.

There were mostly the same sponsors as last year: Kärcher, Bosch, Lenze and Logicline, the organizer of the event. This year additionally there were Festo, Adamos, TeamViewer, and InternetStores as well as the special FinTech sponsors from the financial industry: Stuttgart Financial, Wüstenrot, Boerse Stuttgart, Windata and GetSafe. When you consider the sponsors the Hackathon was mainly focused on IoT and Finance.

After we were through the sponsors it was time for teambuilding and finding the right idea. With Freddy, Fynn, Nick, Robin and myself we were already five people. Fynn and Robin are friends of Freddy (and now of mine too).

Our final idea was quickly found in Freddy’s idea of the power nap app, but we also wanted to implement some IoT features for the wake up alarm. So the next thing was to develop the idea further and create a backlog. In the next section you can read more about our idea.

At 8 pm it was time for the good old Maultaschen from Lou’s Mauldäschle (Freddy really enjoyed them 😜).

After the dinner, we started to develop in our different areas. Fynn created the first UI, Freddy started the Apple Watch development, Nick explored the Sphero ball, Robin tested the Phillips Hue and I was researching what data was needed to predict the perfect wake up time.

Fynn and Robin were leaving later, while Nick, Freddy and I were planning to take the pizza at 2 am and then go to sleep for some hours. 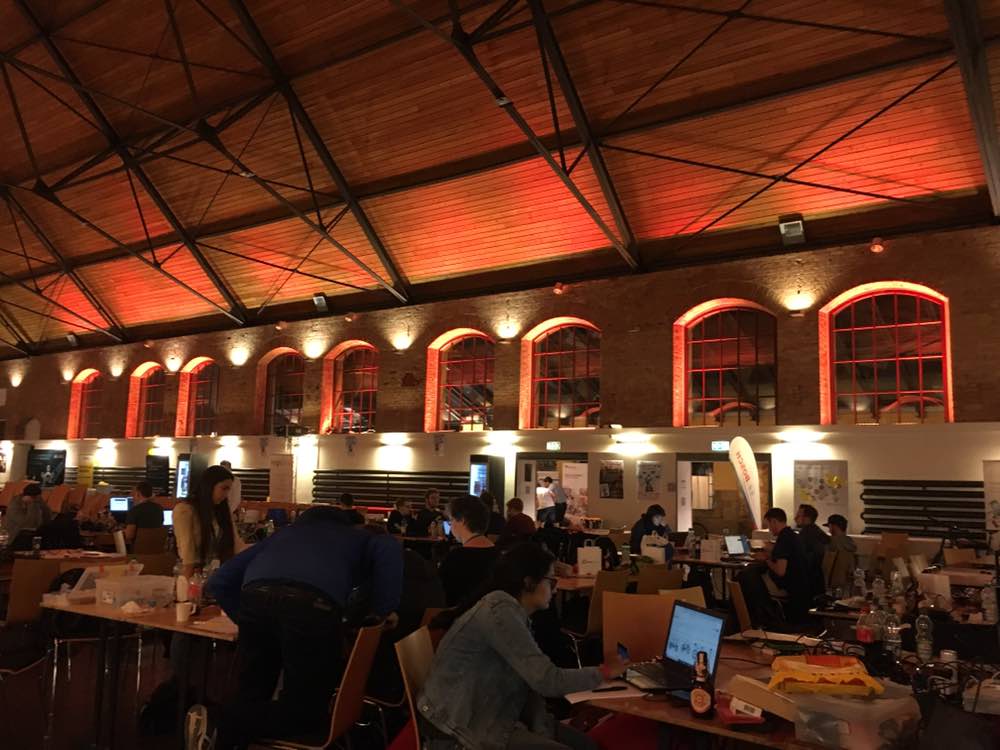 Power Naps are awesome — you only need around 20 minutes to refuel your energy. At least most of the time. Sometimes you wake up and you still feel tired or worse you’re more tired than before.

One of the problems is, that you actually not nap for 20 minutes, because you are not falling asleep instantly. Sometimes it takes one minute, sometimes five. So your actual nap can vary from 5% to 25%.

This leads us two another problem: There are four to seven phases of sleep. Two phases are defined as deep sleep, at which time you feel the most tired when you wake up. The best time to feel fresh after waking up is right at the end of the REM phase (rapid eye movement) when your brain is most active. The REM phase is recognizable by the blood pressure, the heart rate and the HRV (heart rate variation). The last two values are both measurable with the Apple Watch (HRV since generation 3).

To also implement some IoT (since we are on a kinda IoT hackathon) in the project we had the idea that there should be two ways to be woken up: The Sphero ball, which launches and you have to bring it back to the station to stop the alarm and the Phillips Hue light bulbs, which should give you the right light to wake up.

Nick had the idea for the brilliant name Happy Nappy, on which we all agreed.

We continued to work on our project Happy Nappy. I had some real problems to get back into Swift. I just knew the basics and so it took a while till I was able to actually program some useful stuff. My part was to get the health and exercise data to calculate, when there should be a notification for the user to take a nap, as well as how long he should nap. Freddy was trying to get the HRV value from the Apple Watch, Fynn continued to make the UI look good, Nick was trying to get the Sphero ball going in non random direction and Robin worked from home on an API to control the Phillips Hue.

Later a team picture was taken of us and we had to write a short description, which Freddy and I took some time to write a real marketing text. Freddy also edited Tom Dockle, the name of the dude on the logo of the hackathon, to sleep on our team picture. 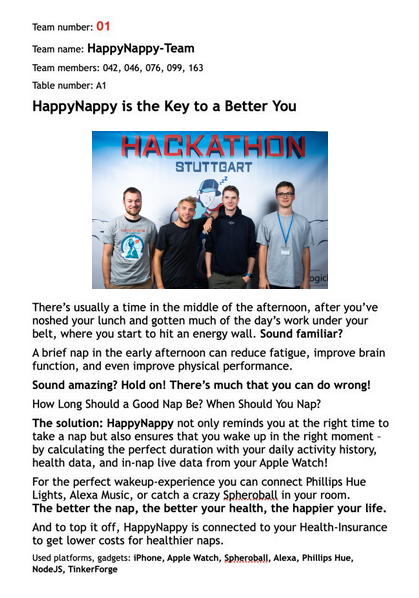 Later I took a nap for one hour just to collect some sleep data. Mainly the heart rate and the movements were measured and we were able to visualize the results in a chart. Fynn and Freddy tweaked the algorithm to get the right dimensions of the chart and in the end, we were able to interpret my sleep data to find out when I slept deep and when I was close to waking up. This was kind of a break trough because it proofed us right that our idea would be possible to realize. During this Nick worked on a 3D model for a base which the Sphero ball should launch from and where it should be brought back to stop the alarm. In the evening I finally succeeded to get all the health and exercise data from the user and started to change the UI of the app to match the UI of the Apple Watch app while Freddy improved the nap history and detail view.

After the pizza at 2 am Freddy and I (Fynn went home and Nick slept already under the table) decided to capture some more data during a nap of half an hour but we ended up sleeping until 7 am.

This was the last day of the Hackathon Stuttgart 2018. At 9:30 am the first jury round started where we had to pitch our project for the first time. Until then we had to finish up the app. We had some more sleeping data from last night to work with and the 3D print of the Sphero launch base was fully printed as well. While Nick worked on the launch and brought back detection on the Sphero launch base Freddy finalized the watch app by adding the song Sandstorm from Darude as the alarm tone. Fynn worked on the machine learning model and I finalized the nap time algorithm. The last thing we did was to integrate the Sphero ball and the Phillips Hue.

We were in time and so Freddy prepared the keynote until our first jury pitch which decided which twenty teams can pitch in front of all. These twenty were then able to win one of the four jury awards. After the first pitch, confident as we were, prepared for the second pitch with a live demo.

After the lunch at 12 pm and the official end of the developing the school teams presented their projects and the first twenty teams for the second jury round were announced. 🎉 We were one of them. So Freddy was finalizing the pitch and we shot a backup video in case the live demo was failing.

The pitches started at 2 pm. Some of them were interesting others not so much. Freddy pitched our project really well. Unfortunately, the Sphero ball wasn’t launching during the live demo, so we played our backup video just in time.

There were four awards: best idea, best pitch, best implementation and the audience award, which only the remaining teams, which didn’t pitch could win. Further, each sponsor awarded a prize. The only prizes we really thought we could win, were the one of the best idea and maybe the best pitch because we were not using any of the provided sponsor platforms or products except the Sphero ball and the Phillips Hue which were gadgets of the organizer Logicline. In the end, we won nothing, but we already decided: This was just the start of Happy Nappy. 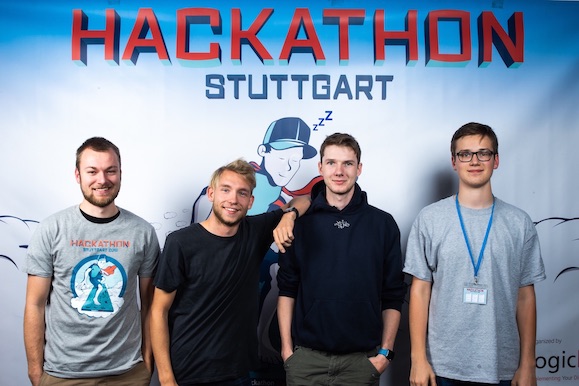 The Hackathon Stuttgart 2018 was fun and well organized. The food was good, but I don’t get the reason for the food voucher. There should be enough food for everybody even without the voucher. And the waiting line was sometimes way too long. This is complaining at a high level, but there is always space for improvement.

As written above, this was just the start of Happy Nappy. With Happy Nappy we will revolutionize how people nap and thus improve their lives. To stay updated check us out on Twitter @GetHappyNappy. We are looking for beta tester.

All in all a great weekend, a lot of fun and productivity. Thanks to Hackathon Stuttgart.