It all started out with the idea of solving a sudoku puzzle from an image with some kind of computer vision. I searched on YouTube and found some examples with github projects about it. Quickly I found out that OpenCV is the way to go. In the following I will present you the steps a programm has to do to recognize a sudoku puzzle, its numbers, solve it and in the end reply it to a tweet. Use the list to navigate to the sections

To make this project harder for me and learn a new language I decided to go with python. For the whole article we will use the following example image. 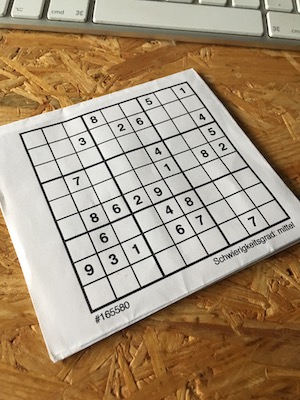 In this section we want to recognize the sudoku puzzle and get an image like the following. For that we have to do three steps. You can find the code for this section in the image_processpr.py file. 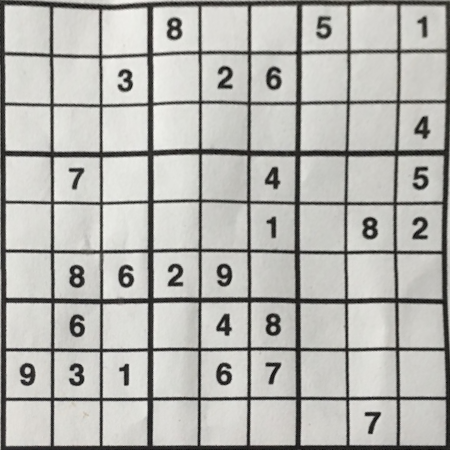 Because working with huge images is costly let’s first resize the larger side of image to 800px if its above while keeping the aspect ratio.

For better analysis of our image we remove the color. Then add a Gaussian blur filter for noise removal and do adaptive thresholding.

Get the four Corners

To get the four corners of the puzzle we first have to get all the conourts from our threshold image.

For each contour we now can check the size and if it has four corners. We want to find the biggest square. If we can’t find a big square biggest stays None.

In this image we can see all contours found in the threshold image (blue) and the biggest square (green). 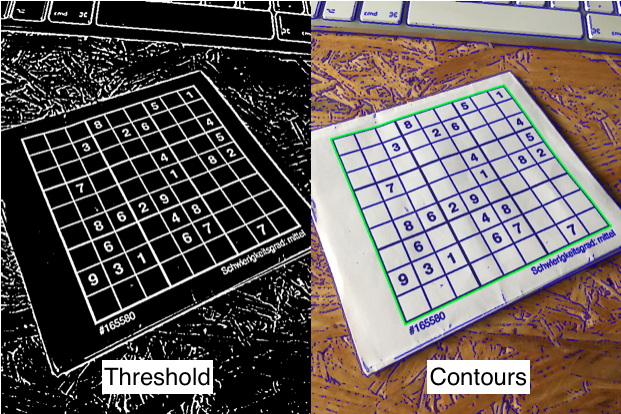 Now we should have biggest and the corners as (x,y) tupels in corners. We assume that the sudoku on the image is in the right orientation (not rotated over 90° in any direction). We don’t get the corners in any specific order. So we first have to bring them in the right order of [top-left, bottom-left, top-right, bottom-right] with rotateCorners(corners). After the perspectiveTransform and warpPerspective we get our rotated, transformed and cutted image.

We get our rotated, transformed and cutted image as threshold and from the captured image. 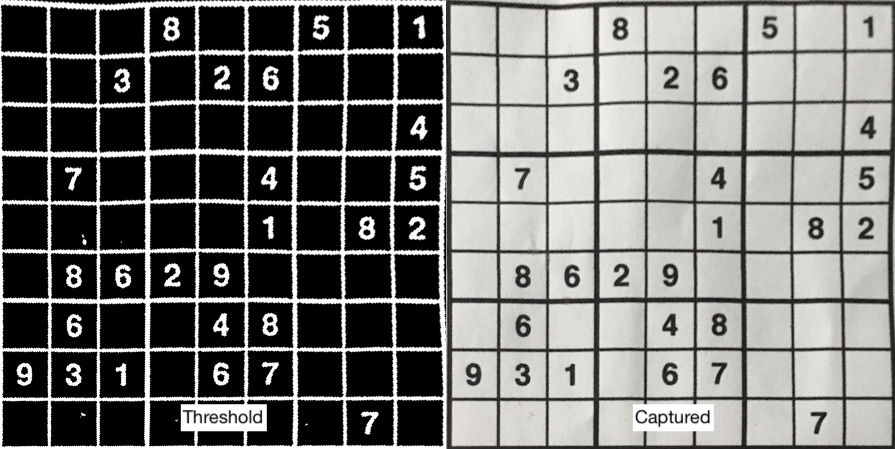 For the digit recognition we use the machine learning library of OpenCV. More specificly the k-nearest implementation of the library. After we created the model we can easily loop through the sudoku and predict the digit of eacht field.

Firstly we create training data to train the machine learning model. You can find the train-algorithm-code in the ml folder of the repository. The output of the code are generalsamles.data and generalresponses.data. In the ocrClass of the image_processor.py we create a model and train it with this samples- and responses-data.

We start by creating an array filled with zeroes, which means the field is empty. After that we get all contours of the cutted threshold image and loop through each contour area, which then should be our digits. To be sure we check them for their size. Then we can recognize the digit with our machine learning model by calling the function getNumber of the ocrClass.

In the getNumber function we resize the given thresholded image of the digit and use the findNeares of the ml library to predict the digit.

There are less and more comlex ways to implement a sudoku puzzle soling algorithm. You can find a very interesting lecture on the subject from Srini Devadas here. Instead of implementing the algorithm myself and because my focus lies on the computer vision part of this project, I ended up using Peter Norvigs code. He describes it in detail on his website. I realy recommend to read it!

While finishing up the code I thought about how to publish the sudoku solver for others to use. And because I like the existence of more or less useful twitter bots and always wanted to develope my own, this was the right opertunity for it.

The goal ist to create a bot where you can send tweets at and which replys with the solved puzzle.

To get events from twitter to our application we have to use a webhook, which we have to register and connect to out application.

First we need to create a new twitter app here (You have to register for a twitter developer account if you haven’t yet). We fill in all required fields.

After we created the app we have to setup its permissions under ‘Permissions’ > ‘Access’ section > enable Read, Write and Access direct messages. Now we can get the credentials under ‘Keys and Access Tokens’ > ‘Your Access Token’ section > after clicking ‘Create my access token’ button. We now have our consumer key, consumer secret, access token and access token secret. These credentials are later used to connect our application to twitter. We will provide them to our application via environment variables.

For simplicity we use a simple Flask server to deploy out application. For the twitter webhook we need a route /webhook with two http methods:

This is needed to perform a CRC check and confirm the identity of our application-server.

This is the actual route Twitter is sending all events to. Here we have to implement whats happening on different event types twitter is providing to us. For now we want to react to tweet_create_events.

When we reply to a tweet, this route triggers again. Bacause we don’t want to reply to our own responses on tweets we have to ignore them (line 13 following). It’s the same with replys from other users (line 18 following). All the magic is then happening in line 23 main.solveTweet(likeObject, True).

In the solveTweet function we extract the username and the image of the received tweet. There are three possibilities we have to reply to:

Following instructions relate to the project on Github.

Send a sudoku to @easySudoku. Hopefully you get a reply with a correct solved puzzle.